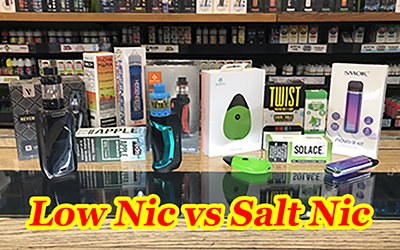 You might have heard it called nic salt, salt nic juice, nic salts, or nicotine salts. Whatever you want to call it, it’s becoming extremely popular among vaping enthusiasts. There are a few reasons nicotine salts are becoming more popular than low nicotine, ranging from the devices used to enjoy it to the smoothness of it. For the most part, everything we love about nic salt can be traced back to its potency.

The biggest difference between nicotine salt and freebase nicotine is the vape juice nicotine level. Freebase nicotine can’t achieve nearly the same levels of nicotine without becoming extremely harsh. Many of our customers say that they find themselves vaping low nicotine all day until they feel satisfied, and it makes their throat feel raw. Since nicotine salts can contain much higher levels of nicotine, most people say they find themselves vaping less frequently after making the switch.

Why Do People Buy Nic Salts?

While the strength of nicotine salt is what ultimately makes it so popular, there are also some finer points to the experiences you can get with it:

The older style of vape juice is known as freebase nicotine, and it’s actually been around in various forms since the 1960s. The term freebase indicates that nicotine has been isolated from everything else as much as possible to get it in its most concentrated forms. This makes the nicotine levels a lot higher, and the potency allows it to be absorbed and processed by your body quickly.

A famous cigarette company behind top brands, figured a lot of this out about six decades ago in the 1960s. At this point, they were adding nicotine to their cigarettes to make them more addictive. The key to freebasing nicotine for consumption in this way is to strip away some of its chemical structure to make it more volatile. As this happens, it becomes easier for nicotine to cross organic membranes in your body. This means you’re getting more of it into your lungs and your brain quickly.

For people who want high nic levels, this may sound like a good thing. If that’s the case, why does everyone keep making the switch because they say nicotine salt is stronger than freebase nicotine? To take this step forward, the vaping industry actually takes a page out of nature’s book.

How is Nicotine Salt Different?

Where it exists naturally in tobacco leaves, nicotine naturally has the chemical composition of a salt. In other words, it’s made up of a positive charge and a negative charge, or an acid and a base. Cigarette companies were using ammonia to literally free the base (hence the name) and remove the positive charge. This was often achieved by using a salt such as diammonium phosphate to create ammonium when the cigarette was lit on fire. This reaction is what freebased the nicotine and made it ready for inhalation.

1. Lowers the pH balance of the salt nicotine to create a smoother throat hit

2. Helps the nic salts vaporize at lower temperatures so they’re not as hot in your throat

3. Creates a chemical reaction that helps free the nicotine so it becomes more absorbable like low nicotine

The smooth, cool hits of nic salts combine with this high level of bioavailability make it ideal. You can vape more of it without making yourself uncomfortable, and your body ends up absorbing more nicotine along the way.

These changes to the chemistry make it so nic salt can be enjoyed with much less powerful devices. Using a high-wattage device like a sub-ohm to vape potent nicotine salt would deliver too much nicotine. Some people who don’t know about nic salts might say, “there’s no such thing as too much nicotine.” Trust us, though, there really is.

Using a device with low wattage allows you to find convenient options that are sleek, small, convenient, and inconspicuous. You can even find one that auto fires if you don’t like the idea of holding a button down when you switch to vaping. Most people agree that these devices are more straightforward, more convenient, and just generally more enjoyable to use.

To get a low-wattage device for nic salts, choose one of the following options with high resistance:

Freebase Nicotine Vs. Nic Salts – Which is Better?

Where to Buy Salt Nic Juice

Here at HQ Vape & Smoke, we’ve set up Headquarters in Tempe, AZ as well as Denver, CO. You can visit us in either city to get all of your vape supplies including nic salts. Stop by today, and we’ll hook you up with everything you need for an awesome setup.

Call Now Button
HEY, WE GOTTA ASK,
Are you at least 21 years old?
WARNING:
This product contains nicotine.
Nicotine is an addictive chemical.